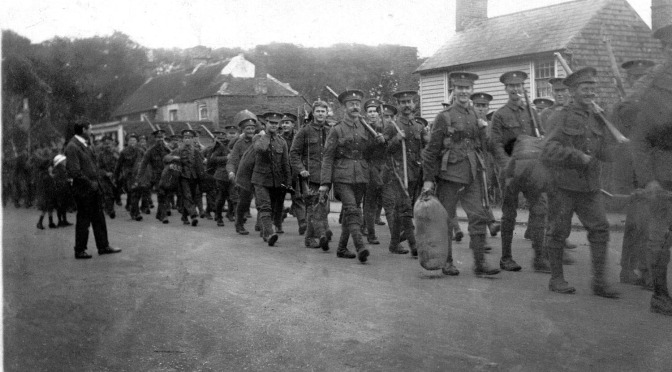 Set up by the Royal British Legion, the new website ‘Every Man Remembered‘ has been set up to honour and commemorate every single man and woman who died in the Great War fighting for Britain and the Empire. It is a really fantastic idea, and as a One Name Family History Society, I feel it is essential we should commemorate everyone from the Lin(d)field families who lost their lives. Donations can also be made to the Legion in memory of an individual.

In their preamble to the website, the Legion summarises the concept:

The Royal British Legion is working with the Commonwealth War Graves Commission to keep alive the memory of those who fell in the First World War, for future generations. We would like every single man and woman from across the Commonwealth who fell to be individually commemorated by those alive today. This is your chance to take part in a truly historic and incredibly significant act of Remembrance.

Please take a look at the site and go ahead if you would like to commemorate someone within your family who may have made the ultimate sacrifice – or indeed you can simply choose someone with the  Lin(d)field Name or any other connection with the family.
The Commonwealth War Graves Commission (CWGC) has supplied a huge online database listing all the casualties, and there is a simple search box you can fill in on screen to locate the individual you are looking for. You can commemorate them with a personal dedication, write a short story about them and upload photographs, making it a unique record of their lives before they were tragically taken in the service of King and Country. A total of 1,117,077 service personnel from the British Empire died in the war, which began in 1914. For those with have no-one to commemorate, people are encouraged to ‘adopt’ someone so that by the end of the project – which has been described by the Legion as the ‘greatest act of remembrance’ to mark the centenary – every single man and woman will have been left a tribute and remembered for their sacrifice.

As of this exact moment, 93,443 people have been remembered, so there is still a long way to go. So far, I have commemorated 6 individuals – 3 are Linfields (Frederick Linfield, who died on 2 April 1917 in an attack on Croisilles; Percy Frank Linfield, killed in an air raid on his camp in France on 15 October 1917; and Harold Frank Linfield, killed at Aubers Ridge on 9 May 1915). I have also commemorated Israel Avery, whose younger sister Mary Offer, was a founder member of the Lin(d)field One Name Group; Roland Fraser, a great-uncle of my wife’s;  William Frederick Drughorn, about whom I  wrote an article for the newsletter of the Crawley Museum Society; and , shortly, I will be writing a tribute to Harold Edward Hussey, for no other reason than his name is recorded as a dedication in a book of Rupert Brooke’s poetry I have  (his well-known ‘1914 and Other Poems’, this copy published in 1917). It says on the inside cover: ‘In memory of Harold, March 25th 1917’. He has no known grave, but his name is recorded on the Basra Memorial in Iraq.

Some years ago I wrote an article in Longshot entitled ‘Memorials to the Dead in the First World War’ (Longshot Vol. 10 No. 1, July 2003), in which I talked about the process by which the Government decided to devise an appropriate memorial to the war dead to be made available to the next of kin. The outcome was the creation of a bronze plaque with the inscription ‘He died for Freedom’ (or ‘She died for Freedom’) to be part of the design. It was tendered as a public competition for the most appropriate design.  Some 800 entries were submitted, with the winning design being chosen on 24 January 1918. It subsequently became known as the ‘dead man’s penny’. In addition to the plaque, a scroll with a suitable inscription would be issued, the printing of which commenced in January 1919. The memorials were accompanied by a letter from the King, bearing a facsimile signature, and the words: ‘I join with my grateful people in sending you this memorial of a brave life given for others in the Great War. George R.I.’ It was common for memorial plaques and scrolls to be displayed in the family home, and where they have survived, they are still a poignant and very personal tribute to the person who died.