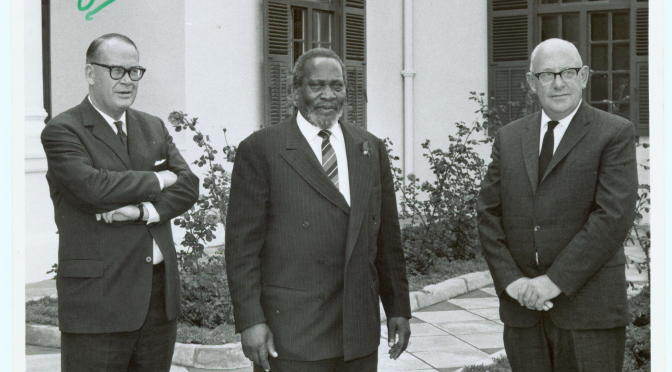 My initial interest in Jomo Kenyatta, first President of Kenya, was inspired by his links with my family during the Second World War. I knew he had spent most of the war years working as a farm labourer at our family business in West Sussex. I remember my grandfather telling me many years ago that he had Kenyatta over to lunch when they discussed politics, among other things. I don’t expect they always agreed on everything, but my grandfather had obviously found him to be an interesting and intelligent man, and he was intrigued enough to find out what he had to say for himself. In fact, Kenyatta gave him a book he had recently written, called ‘My People of Kikuyu’ and he wrote inside the front cover: ‘To AG Linfield. With best wishes, Jomo Kenyatta. 17-4-42’ (Fig.1). The fact that my grandfather kept this book for over 30 years, before passing it on to me, surely indicates a certain respect for this man and his views, even though Kenyatta’s opinion of the British Empire was undoubtedly quite different to his own. I regret now not asking him what he thought about the ‘Mau Mau’ rebellion and Kenyatta’s role during this colonial crisis.   END_OF_DOCUMENT_TOKEN_TO_BE_REPLACED