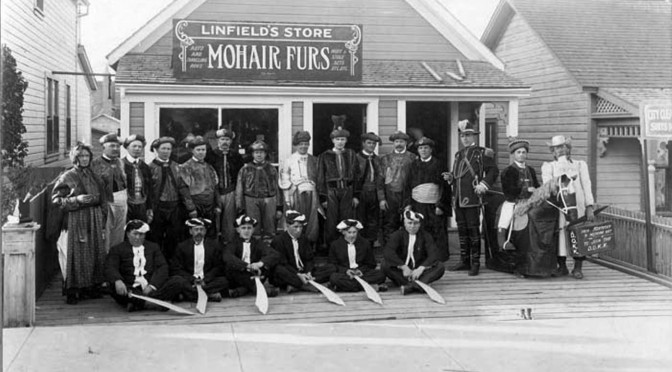 Sometime during the mid-1850s, Mark Linfield (1825-1909) moved with his young family to the town of Ventnor, on the Isle of Wight. Mark was a linen draper1 by trade, and in the 1851 census he is recorded as such at 1, Albert Terrace in Camberwell, with his sister Jane and younger brother Stanford Frederick (1829-89), also a linen draper. Mark and his siblings were all born in Storrington, West Sussex and were the youngest three children of William and Harriet Linfield (née Stanford) who were married in 1803. Both Mark’s father, and grandfather Peter Linfield (1734-91), were farmers and butchers in Storrington, a trade followed by his older brother, Thomas (1812-84). Sadly for Mark, Jane and Stanford, they were orphaned when both their parents died in 1835. They were all still very young – Mark was ten, Jane 12 and Stanford only 6 – so they began life with a distinct disadvantage. They were brought up by older siblings, who no doubt wanted to relieve themselves of the financial commitment as early as possible. And so, by 1841, at the age of 15, it is hardly surprising that Mark is working as an apprentice to Henry Marshall, draper of High Street, Steyning. END_OF_DOCUMENT_TOKEN_TO_BE_REPLACED

Jomo Kenyatta and his Connections with West Sussex, by Malcolm Linfield [Revised Oct 2015]
Peeps into the Past
Worthing Burials: Part 1, by Alan Lindfield
Portrait Gallery
The Isle of Wight Linfields, by Malcolm Linfield
The Misadventures (and Descendants) of Elizabeth Linfield and John Whittaker (Part 4), by Dolores Christophel D’Errico

Front cover: Linfield’s Store, Medicine Hat c. 1914, soon after the arrival of Charles Ashover Linfield and his family to Canada in 1913. See article ‘The Isle of Wight Linfields’, by Malcolm Linfield on page 63.