There cannot be too many among our readers who haven’t heard something of the legend of William Lindfield, who was entombed at Bramber Castle. It’s a chilling story, not unworthy of a place in the fiction of Edgar Allan Poe. I first came across it in the local guide, published by the village museum. (Ref. The History and Legend of Bramber Castle. Herbert E. Erredge; Bramber Museum) Despite his obvious embellishments, Erredge has produced an entertaining account of a particularly gruesome episode, and what follows is a summary of his narrative.

It would appear that the events described took place towards the end of the 15th century, when Lord Hubert de Hurst was in occupation of the castle at Bramber. At the time of his first meeting with Lord Hubert, William Lindfield was “the last member of a family which had once been wealthy, but which had lost a good portion of their estate through political misfortune.” A keen sportsman and a good rider, a friendship sprang between Lindfield and de Hurst who shared the same interests. De Hurst, a good deal older than Lindfield, was often subject to attacks of gout; confinement in bed proved rather boring, so he would often summon Lindfield to entertain him. De Hurst’s wife, the Lady Maud, was scarcely half his age and had been forced to marry him against her will. Therefore, it was hardly surprising when she began to show an interest in William who responded equally in affection. Soon they were on intimate terms, meeting every evening in a pleasure house in a remote part of the grounds; how many hours they spent together is unknown, but eventually de Hurst became suspicious and etermined one evening to follow his wife during her hour of grace.

He followed her as best he could. He saw her enter the pleasure house and close the door behind her. He placed his ear against the door and although not surprised to hear William’s voice, he almost suffocated in a rage of jealousy. Nevertheless, he resisted the urge to barge in on them, and returned quietly to the castle, determined to rid himself of this treacherous philanderer. Next day, he induced William to make a journey to an estate which he owned in the north of England, so he could carry the preparations for his plan. Whilst William was away, de Hurst was designing his tomb! Under the pleasure house was a cave, used to store corn during the Wars of the Roses. De Hurst laboured night and day to cut away a portion of the floor, forming it into a sort of trap door, which he secured with a bolt underneath. William returned from his mission a month later, and immediately de Hurst simulated another attack of gout. That same evening, he followed William to the pleasure house, having purposely delayed his wife by engaging her in conversation with his sister. Admitting himself into the cave, he noticed the strain formed on the trap door above, which indicated that William was sitting just where he wanted. He removed the bolt and William tumbled into the vault at his feet; before he could recover, de Hurst had seized him by the neck and thrown him into a cell at the far end of the cave.

The place was cold and damp, and William shouted and raved in vain – but nobody could hear him. Some thirty hours later, de Hurst returned and handed him some bread and water which William gladly accepted. But soon after, William saw something which must have sent shivers down his spine. De Hurst was laying a bed of mortar, and then a row of bricks upon it, about a yard in front of the cell door. William groaned in terror – he was to be buried alive! Each evening de Hurst added another layer of bricks and gave him more food; eventually he got to the very top, and William was left to die of starvation. Meanwhile, de Hurst accounted for William’s disappearance with the tale that he had had to go to France, which was generally believed.

Many years later, when the castle was demolished during the Civil War, they broke through the wall which concealed the evil crime of the monstrous Lord Hubert – and there they discovered the mortal remains of William Lindfield.

These then are the essential details of the Bramber Castle legend. Unfortunately, Erredge’s account of events appears to be the only source of the story, and since he gives no references, there is no direct way of checking the evidence. Stanford Smith attempted to identify William,  which is shown below in a short family tree he sketched in one of his letters, and he believed he was probably descended from the eldest (Surrey) line of the family.  This is only guesswork, of course, and we have no documentary proof to corroborate the story. 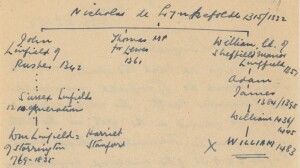 Stanford Smith’s suggestion as to the identity of ‘William de Lindfield’ in a letter dated 2 Dec. 1956. William is marked with an X next to the date 1483.

Stanford Smith’s comments are quite interesting. He does not dismiss the story, far from it, but  warns  against the liberties taken by Erredge:  ‘It is an obviously romanticized version and the author  has drawn much on his imagination . . . you can disregard the trimmings’. He continues: ‘to make his account more picturesque he has turned plain Linfield into  DE LINDFIELD. I am sure the French particle did not survive till as late as the 15th-16th cent, and Lindfield is a comparatively modern spelling derived from a mistaken notion that the name is spelt in the same way as the village’.

We are currently registered with the Family Origin Name Survey (FONS) to receive documents dated before 1600 which contain references to the Lin(d)field names. Perhaps we will eventually obtain the evidence we require to support the basic facts behind Erredge’s narrative; in the meantime, further investigation is required.

For a start, it would be quite useful to know, firstly, who was Herbert E.  Erredge and when did he write his “history” of Bramber Castle, and secondly, did Lord Hubert de Hurst and Lady Maud actually exist? If they did not, then the legend of Bramber Castle is pure invention.

If there is anyone reading this who would like to pursue these matters further, then please get in touch. It would be a great achievement to authenticate the legend; on the other hand, if there is no proof that the events described ever took place, it is just as important that we should know the truth.

4 thoughts on “The Bramber Castle Legend”